12 of the Best (and Most Offbeat) Attractions in Montana! 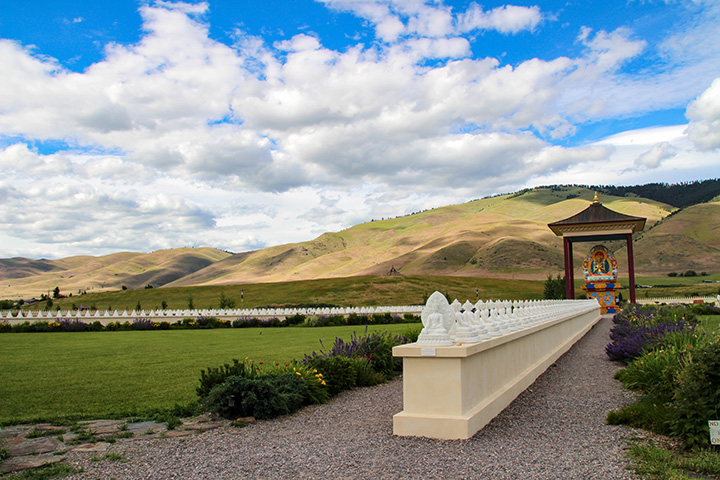 A fascinating and frightening facet of life is the realization that the more one “knows,” the more one doesn’t know. The more one digs, the more there is to be dug. Such is certainly the case when delving into the eccentricities of a particular state. Despite the stereotypes, Montana is an eternally-intriguing polity, offering fascinating experiences for the traveler, as long as they don’t mind getting a little dirty. Below are some of the more unusual Treasure State attractions.

The Montana Vortex in Columbia Falls is one of the coolest natural anomalies in America, let alone Montana. It presents a gravitational anomaly in which individuals appear to shrink and grow as they walk mere feet on a level surface. Dangerously-slanted structures, abnormal tree growth, tangible magnetic fields and other peculiarities are plentiful here, all perplexing byproducts of a quantum fluctuation that’s yet to be explained. The on-site House of Mystery is similarly mind-shattering. Things don’t make sense in the vortex, and it couldn’t be cooler.

Montana is home to a wealth of dinosaur fossils—The Montana Dinosaur Trail is a road-trip magnet that extends across the state, encompassing 17 museums. Bynum is a small roadside blip, but hosts the Two Dinosaur Center, easily discovered via its large T-Rex statue at the entrance. But this beast pales in comparison to the full Seismosaur—a 137-foot predator resembling a T-Rex/Allosaur hybrid—named Guinness’ largest complete skeleton in world. And while at the center, take a tour and learn about archaeology and Montana’s vibrant history of terrible lizards.

Montana’s first state park, Teddy Roosevelt named this limestone labyrinth a national monument on the same day as Grand Canyon. Something out of the imagination of HR Giger, over 3,000 acres of stony catacombs surround tour-goers, an eerily-vibrant system of speleothems—stalactites, stalagmites and other cave deposits, simultaneously alien and terrain. The Wild Cave tours are the way go: for $30, a guide leads cave expeditions with only authentic headlamps for light.

A fascinating museum in its own right, this Western prison complex housed a number of famous criminals. Its history attracts lovers of the Old West, of Montanan traditions, of prisoners and their stories. And, in the last decade or so, the complex has attracted those seeking-out the paranormal. And it’s easy to understand the allure. The ominous vibe has a palpable tenseness: The intimidating, brick-encased environs couldn't be any colder, any less alive. Sounds of all sorts echo the stone halls and ring into infinity the machinations of felons’ past.

Montana is packed with several worthwhile Western museums, many exceedingly better than the gimmicky knick-knack storefronts dotting roadsides nationwide. The Yellowstone County Museum is humble in size, but bleeds authenticity and a truly compelling history. Sure, there’s several hand-stitched, century-old saddles and garb and tools—and a two-headed calf. But a particularly intriguing exhibit is the diorama and descriptions of Sacrifice Cliff. At this mythic location, an unknown number of Crow tribesmen blindfolded themselves and rode horses to their death, a sacrifice intended to appease deities for the smallpox epidemic

The abandoned mansions and vacant properties of Old West aristocracies have an eerie charm. The drying-up of mining left many of these venues, while maintained, empty and beckoning for visitation. This elegant and intimidatingly-detailed castle reverberates with occupants’ past. Believers assert seeing the apparition of the head maid, as well as TC Power himself, in the same room in which he died. Be one a skeptic or otherwise, the building’s immensity, the domineering aristocracy embodied in its orate fixtures, and the damp, ancient must only serve to embolden one’s (sub)conscious fears.

A large, bearded man speeds by, careening down a snow-covered slope, fixing himself to his transport with clenched fingers. He’s on a barstool. Yep, the barstool races are somewhat of a famous oddity near the Gateway to Glacier. Approaching its 40-year anniversary, the ritual is part of the annual Cabin Fever Days, a weekend of winter activities for families and fun seekers alike. The weekend serves as a fundraiser for local nonprofits, packed with food, games, contests, and most interestingly, the barstool races. There are several age and skill-level groups, with the championship race taking place on Sunday.

Some fads surge and die. Others fizzle-out, but don’t quite fade. The tiki bars of the mid-20th century are mostly gone, but the few that remain do so in style. The nostalgia of the post-war Pacific and the romantic aura that followed troops back to the states remain in full-swing at the O’Haire Motor Inn. There, the Sip ’n Dip bar in Great Falls happily holds-on to those cliché relics, in the best way possible: Hula girls and grass facades and a collection of umbrellas sprouting from island cocktails. And the view from the bar is unmatched: A full pool rests behind glass, it’s flickering light casting a blue hue on the space. Within swirls a beautiful mermaid—yes, a living one—a dervish suspended in blue light, a moving painting that dances happily as one sips a sweet mixed-drink.

Montana and Buddhism—it’s like peanut butter and…ketchup? In the middle of the Flathead Indian Reservation stands a Buddhist shrine, a spiritual locus intended as an “International Peace Center.” Other than its obvious Eastern novelty, the complex is impressive in its succinct precision and organization: An aerial view reveals 1000 Montana-made Buddha statues sitting symmetrically on an 8-spoked dharma wheel, the center of which is a beautiful sculpture of the “Great Mother of Transcendent Wisdom.” The pristine scenery surrounding the garden only adds to this hub of peace. So, come for the landscape, the Spartan architecture, classes in mediation, or the 1,000 statues. Or, simply arrive, relax and let yourself be truly absorbed.

It’s very ironic: Stellar natural beauty amidst a monument of man-made engineering. But the Gibson Dam, about an hour west of Great Falls, affords a truly singular panorama of the Sun River and its environs. The fishing and boating is very popular on the eponymous reservoir, and hiking opportunities abound. Whether you view the dam as an imposition on nature, or as part of a symbiotic marriage of the modern day, the view is indisputable: The sometimes rugged, sometimes rounded Montanan mountains, extending eroding fingers of conifer into opaque, icy-blue water, casting shadows on the monolithic stonework of human engineering.

Find some religion at the St. Ignatius Mission

Resting upon the Flathead Indian Reservation, this Catholic-Jesuit church (ca1890) is home to dozens of original plaster paintings by Brother Carignano, the resident cook, who became a regionally-renowned religious artist and priest. From the entrance, the building opens up into high, cascading ceilings adorned with characters and symbols reflecting the frescoes of Renaissance Tuscany. Be you religious or otherwise, the character the church exudes, and the history attached to its property and surroundings, easily seduces one to thoughts of the Hereafter.

There is no metaphor here: In the southern sector of Flathead Lake lays an island inhabited entirely by wild equines. The “largest island in a freshwater lake west of Minnesota,” this landmass was originally used by local tribes to protect their herds from theft. The 2,200-square acre spot is a true oasis: A serene home to several Derby-ready specimens, surrounded by one of the largest and most beautiful freshwater lakes in the nation. (note: A state and a tribal fishing license are required to visit island.)

All Day
Hobson, MT
Learn More
Select a Montana town to find
the Best Things-To-Do and Places To Go around you